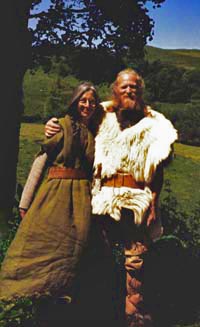 Val and John Lord began their prehistoric technology research projects in 1975, when they were engaged by the Department of the Environment, (now English Heritage), to take custody of Grimes Graves, the Neolithic flint mining site at Lynford, Norfolk.

During the period 1975 - 1988, both Val and John strove to master the art of flint knapping, and as they progressed, they willingly shared their newly gained knowledge with members of the public. This practical demonstration facility was soon made good use of by the Education Service, and groups of schoolchildren were allowed to see flint tools made, and sometimes used, during their visits.

The time spent at Grimes Graves was a valuable and fantastic experience for Val and John. They were continually exchanging knowlege and information with interesting visitors to the site, and in the late 1970's they met Ray Mears, with whom they immediately began to exchange information. This arrangement developed into a firm friendship, and John helped with the flint knapping on Ray's Primitive Technology & Ancient Skills courses.

In 1987, John left Grimes Graves and English Heritage, in order to lead life as a professional flint knapper. John had been contacted by the construction industry, who were anxious to get their hands on knapped flints to use as a building material. The production of flints for building purposes, meant that hundreds of tonnes of large flints needed to be knapped into fist sized pieces. John, assisted by his son William, provided 160 tonnes for one project alone, (the wall that now surrounds the super-structure above the underground shopping mall at Norwich Castle). The opportunity to smash such huge quantities of flint, though often painful, was nevertheless an extremely valuable and unique experience for the knappers involved.

Val stayed on at Grimes Graves until 1992, before developing her role as a cordage and textile specialist by processing natural fibres.

In 1992, both Val and John decided to pool their technologies, and as well as supplying the construction industry with flint, they put their combined primitive technological skills on the road.

Very very sadly, Val lost her battle against lung cancer and she passed away peacefully on July 18th 2015.